If you suffer from a lack of feeling in the hands or feet, like a numbness, you will know how unpleasant and disabling it can be. Although Chinese medicine and acupuncture does not always help these symptoms, I have recently had considerable success in treating two men with numb hands and feet. Western medicine often labels longstanding numbness such as this as peripheral neuropathy, but may it offer little in the way of treatment. Using Chinese medicine I must first look at the whole picture of an individual’s health and illness and seek the underlying cause. Numbness usually indicates that Qi and Blood are not circulating freely in that area – once this is restored, then feeling will return. There are several causes for this reduced circulation, one of which is a weakness of the Blood. 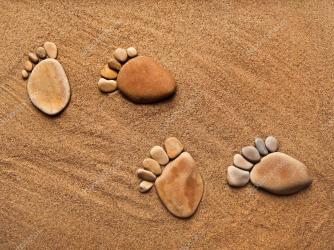 Both of these patients were men in their 60s, and both were in other ways fit and active. The first patient had numbness in both feet, especially the soles of the feet, which was affecting his walking. He walked unsteadily, especially when the ground was uneven, because he couldn’t clearly feel the ground under his feet. The problem started several years ago after a back operation for a bad slipped disc. The operation had left him with some pain and weakness in one leg, which had improved slowly with acupuncture and daily exercises. But it was not until I started strengthening his Blood that the numb feeling quite quickly reduced. Once his Blood was stronger, then the circulation of Blood and Qi improved.

The other patient had numbness in his hands which was gradually getting worse. It was much worse after sustained use of the hand, such as with gardening or computer work. To start with I thought circulation of Blood and Qi was poor because of his chronic shoulder problems. However, although his shoulder pains improved with acupuncture, the numbness was getting worse. Once again it was a strong treatment to strengthen his Blood that made the big improvement to his numbness. The numbness was worse after using his arm muscles, because this use required stronger Blood than his body could provide.

When we use terms such as Blood, Liver, Heart etc in Chinese medicine, we are not talking about quite the same things as within Western Medicine. We use a capital letter to show we are talking in Chinese medicine terms. In Chinese medicine, Blood refers to a wider system of circulation and energy and is connected to the Liver as well as the Heart. Interestingly, in terms of the Five Elements, both of these men were constitutionally connected to the Wood Element. The Wood Element has a particular role to play in circulating Qi smoothly around the body, so this potential weakness in Wood probably contributed to the poor circulation of Qi and Blood.

Yes, this does get a bit complicated! It may sometimes take a little while, but Chinese medicine is very useful for unraveling and treating complex problems